What does a good social strategy look like? - by Molly Flatt @ 1000heads 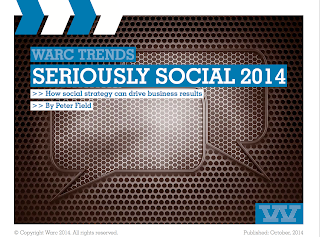 
"As one of the judges of the Warc Prize for Social Strategy, I had four criteria to define social success. Does this strategy use social channels in a uniquely appropriate and/or innovative way? Does it spring from an idea that is inherently conversational? Does it generate enough emotional advocacy to achieve behaviour change? And is it the product of a company that ‘is’ social, rather than one that ‘does’ social to win awards?

Let’s examine the first. Saatchi & Saatchi’s ASB ‘Like Loan’ campaign, which won a Gold Award, used the power of group-buying to create the world’s first home loan rate powered by likes. It’s a great example of a brand using a uniquely social technology to game-change a risk-averse industry. Making an expensive video and slapping it on YouTube – a common tactic for weaker entries – is not.

And what about the small matter of an inherently social idea? What we’re looking for here is a concept that makes people talk, a spark that builds relationships, a story that inspires others to tell their own. A strong example is the Silver Award- winning ‘Animal Strike’ by DDB Group New Zealand for Paw Justice.

The opposite of this is a brand pumping out a smorgasbord of content – Facebook posts, Twitter Q&As, blogger outreach, hashtags – at great volume but without a single coherent, emotional centre that will turn a marketing drive into a movement that others want to own and share.

Thirdly, behaviour change. It’s no coincidence that the Doritos case study scooped the Grand Prix. With its mix of metrics encompassing reach, engagement, sentiment, intent to purchase, shift in demographics of Facebook followers and, yes, sales figures, it was a refreshingly sophisticated definition of social value in an industry that remains over-reliant on views, follows and likes.

The fact is, if you want massive exposure, you might as well just pay for a Facebook ad or put up a billboard. The superpower of social media is not exposure; it’s influence. Did your audience do anything more taxing than clicking on a button or typing a smiley face? Did they create their own content and translate the spirit of your campaign into their own lives and words? Tracking emotional impact and consumer action is an essential indicator of social success.

Finally, a great campaign should be just one manifestation of a brand’s commitment to a lifelong relationship with its consumers (not to mention partners, stakeholders and staff). Running shoe brand Mizuno’s Mezamashii Run Project stemmed from a deep respect for existing online running communities and involved the company being publicly honest about its challenges and mistakes, resulting in an ongoing conversation between equals rather than a short-lived marketing stunt."
Labels: Branding & Advertising 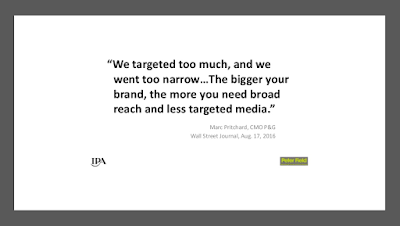 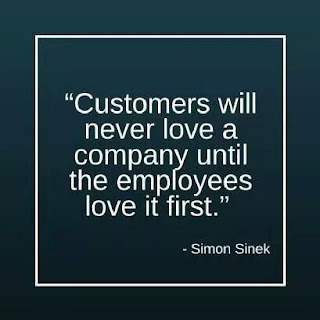